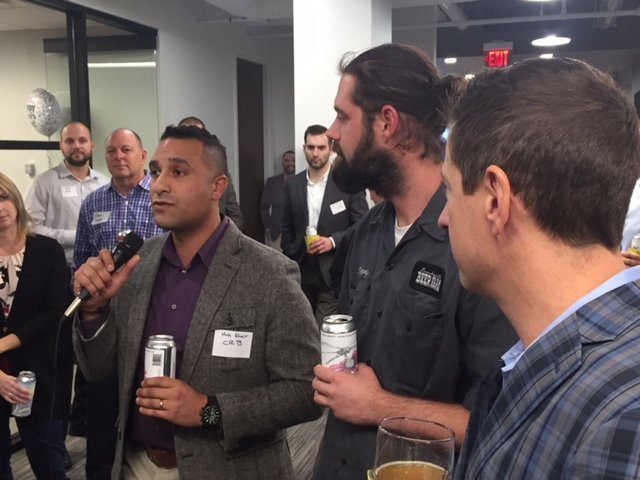 Every October BioBuzz hosts “the Science of Beer”, an Oktoberfest themed event with a local Brewer, and for the past three years CRB has been the sponsor for this fan favorite. Over the years we partnered with breweries like FlyingDog who spoke at IBBR, we went on-site at 7Locks Brewing in Rockville, and this year CRB hosted the event at their Rockville office with Brookeville Beer Farm as our annual brewery partner.

CRB is the nation’s top architecture, engineering and design firm that focuses almost exclusively on the life sciences industry.  After opening their Rockville office in 2013, they have become an integral partner to many of the top local biotech firms. Success in Biotech means growth, and these successful biotechs have grown and expanded their operations into the new facilities that CRB has designed and built for them throughout the region.

One notable project CRB was part of this year was the Paragon Bioservices’ new Gene Therapy Manufacturing Facility at BWI that we reported on in July.

This Oktoberfest event was an opportunity to thank their clients for a successful year so they didn’t want it to be just another networking event. They wanted to provide an experience that would showcase our vibrant community, the strong biotech ecosystem and the overlapping industries that also thrive alongside it; such as craft brewing and farming.

With their office as the backdrop, it was also a great way to invite their clients to meet the whole CRB team, which has grown to more than 30 employees, and see first hand what’s behind the culture of excellence and teamwork that they are known for.

More than 130 attendees registered for the event and came Frederick, Baltimore, Northern Virginia and even Philadelphia where CRB also has a large operation.

For those that missed the event, you not only missed a fun evening at one of the coolest offices in the area, but you missed a great presentation by Brookeville Beer Farm’s head brewer, Kenny Borkmann and Ben Woodard, Director of the University of Maryland’s Bioprocess Scale-Up Facility (BSF). The BSF is run by the University to provide hands-on bioprocessing experience for students and also low cost, high quality solutions for local Biotechs.  The BSF not only works with biotechs like MedImmune and GSK to provide fermentation and scale up services, they also support numerous breweries, like Brookeville, who rely on them for their yeast characterization and fermentation.

Woodard shared the story of how the BSF first started working with local breweries. It was his own personal love for beer that led to a chance encounter with the owner of Denizens Brewing who shared that she was having some problems with a few of their yeast strains.  Realizing the similarities between biotech and brewing, Woodard saw an opportunity to support another of Maryland’s growing industries, craft brewing, with their local, high-quality services. It was a later coincidence that Woodard was coaching the son of Brookeville’s co-owner, Phil Muth, that they connected and began working together., “I have been a Brookeville Beer Farm fan ever since tasting Kenny’s delicious beverage, and the Spinout Beer is one of the best beers on the east coast right now,” proclaimed Woodard.

Borkmann introduced Brookeville, a local farm-brewery located just North of Olney that grows its own hops on the farm and uses mostly local malt as well. They are proud to be supportive of the local community and make it a point to use local ingredients in all their beers.  Including the yeast, which provides the alcohol and some CO2 for the beer, some of which they get from the University of Maryland. “It’s great to work with folks in the biotech community who are doing great things,” Borkmann shared, “and especially Ben and his team who always give us exactly what we ask for.”  Borkmann stuck around all night to answer questions and talk about brewing with the crowd, who all became “Kenny fans” like Woodard by the end of the night. 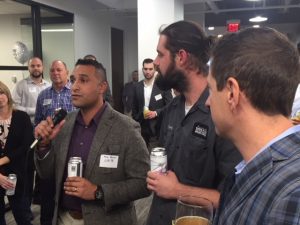 “To all of the companies represented by BioBuzz, we love working with you all helping to grow the Maryland market,” shared Khair to close his remarks, “and we look forward to continuing to do so to see how much we can build up this region together.”

If you believe that life is about being healthy and happy, then this event was a celebration of that pursuit. As a community, CRB and BioBuzz helped celebrate those who create the vaccines and drugs that keep us healthy, and the beer that we can enjoy when we are.  We are all doing good work in this world, and doing it together. 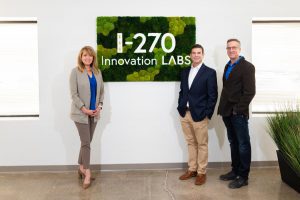