In May of 2018 Kite Pharma, a Gilead Company, announced the opening of a new Neo Antigen Facility in Gaithersburg, MD. Less than one year later in April of 2019, the company, announced that it was building a new biomanufacturing facility on a 20-acre site in Frederick, MD. Since then, Kite has been diligently working to build a world-class leadership team at both sites to achieve an important mission.

Those leaders are now onboard and are out sharing their important mission by engaging the regional community to recruit and hire the talent they need to fill more than 360 job openings across Maryland..

This November, in one of its first regional community events, Kite sponsored a BioBuzz ‘Meet and Greet’ networking event to get their message out to the local industry.  A few dozen of Kite’s employees, including Chris McDonald, VP of Manufacturing and Frederick Site Head, and Wayne Hardy, Senior Director of Manufacturing and Site Head at Kite’s Neo Antigen Facility, shared the powerful, patient-focused “why” behind Kite’s mission.

“Kite is pleased and happy to be part of this community. We’re here to make a difference. We’re on a mission to cure cancer,” stated Hardy.

“There are a lot of people out there who are suffering… there is probably not a single person in this room untouched by cancer. Think about 10 years from now. You could be telling your kids or grandkids ‘I was part of the team focused on the cure.’ That’s why we’re here in this room right now,” he added.

More than 125 people from across the BioHealth Capital Region (BHCR) gathered to hear Kite’s inspirational mission, learn first-hand about the company and get to personally meet its executives, hiring teams and staff.

At the event, McDonald shared that Kite had hired approximately 50 staff to date and anticipates bringing about 160 employees on board by the end of 2020 when the new facility is complete. McDonald understands that the talent market for cell therapy and biomanufacturing is highly competitive in the BHCR and sees regional collaborations and community engagement as important mechanisms to ensure Kite is able to develop and attract the right talent. The ‘meet and greet’ event with BioBuzz is a good example of how Kite is accomplishing this.

“In the end, the best thing you can do as an employer is to value your employees. At Kite, we’re totally focused on creating a workplace environment where our people are excited to come to work each and every day. That’s my aspiration for the Frederick facility,” he added.

McDonald’s philosophy appears to be one that extends throughout Kite as a company.  BioSpace recently rated Kite in its Ideal Employer Report as one of the top 15 Biopharma Employers to provide opportunities for promotion.

Kite’s expansion in Maryland will provide many industry professionals with the opportunity to join a company that is a world leader in the rapidly emerging field of cell therapy.  As the company grows in the coming years they expect much of their hiring to be focused around manufacturing, engineering, facilities, process development, and R&D positions.

Kite’s growth is built on the foundation of its industry-leading position in the cell therapy field. In late August 2017, Kite Pharma was acquired by Gilead Life Sciences for $12B. Shortly thereafter, the FDA approved Kite’s CAR-T cancer therapy, YESCARTAⓇ, making it one of the first autologous cell therapies ever approved by the FDA for cancer. The success of YESCARTA—which is a treatment for non-hodgkin’s lymphoma—has sparked significant growth at Kite, including the construction of its new 280,000 square foot advanced cell manufacturing facility that is set to open toward the end of 2020. The new facility will allow Kite to significantly expand its ability to manufacture next-generation oncology treatments, including YESCARTA and other investigational therapies.

McDonald also shared the news that Kite is currently preparing to present its ZUMA-1 trial 3-year survival data at the upcoming American Society of Hematology (ASH) Conference in December, which will mark a major milestone for the company that could lead to the possible treatment of other blood cancers beyond non-hodgkin’s lymphoma.

With this news on the horizon and the impending opening of its new facility, recruiting and hiring the right talent for its two Maryland facilities will prove critical to Kite’s continued overall success.

The collaborative, patient-first spirit driving Kite Pharma’s mission to focus on the cure was palpable at the BioBuzz event. McDonald and Hardy’s inspirational words, along with the hundreds of conversations with other Kite employees that night, made a memorable first impression on the audience and served as powerful signals that Kite Pharma will be an active and important player in the BHCR for years to come.

Though the event was only a few hours long, Kite’s powerful message is now resonating across the BHCR around water coolers, break rooms and kitchen tables as it gets shared by the attendees that experienced it.

For more on Kite, visit their career page. 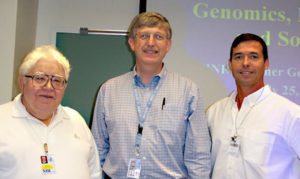 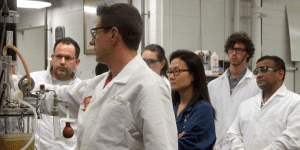