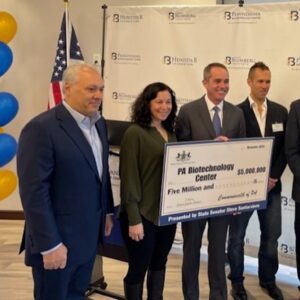 Coming off an election cycle where workforce development in Pennsylvania was a priority for the incoming governor and US Senator from Pennsylvania, a suburban Philadelphia biotech center is getting a few million from the state for early-stage startups.
Doylestown-based Pennsylvania Biotechnology Center (PABC), which guides more than 100 member companies through scientific discoveries and commercialization, is the recipient of a $5 million investment from the State of Pennsylvania’s Department of Health. The funds will go toward PABC’s new Academic Innovation Zone program, which will support early-stage companies and academic technologies in life sciences in two of its incubator programs. PABC is headquartered in Bucks, but also works with B+labs at Philadelphia’s Cira Centre, in partnership with Brandywine Realty Trust.