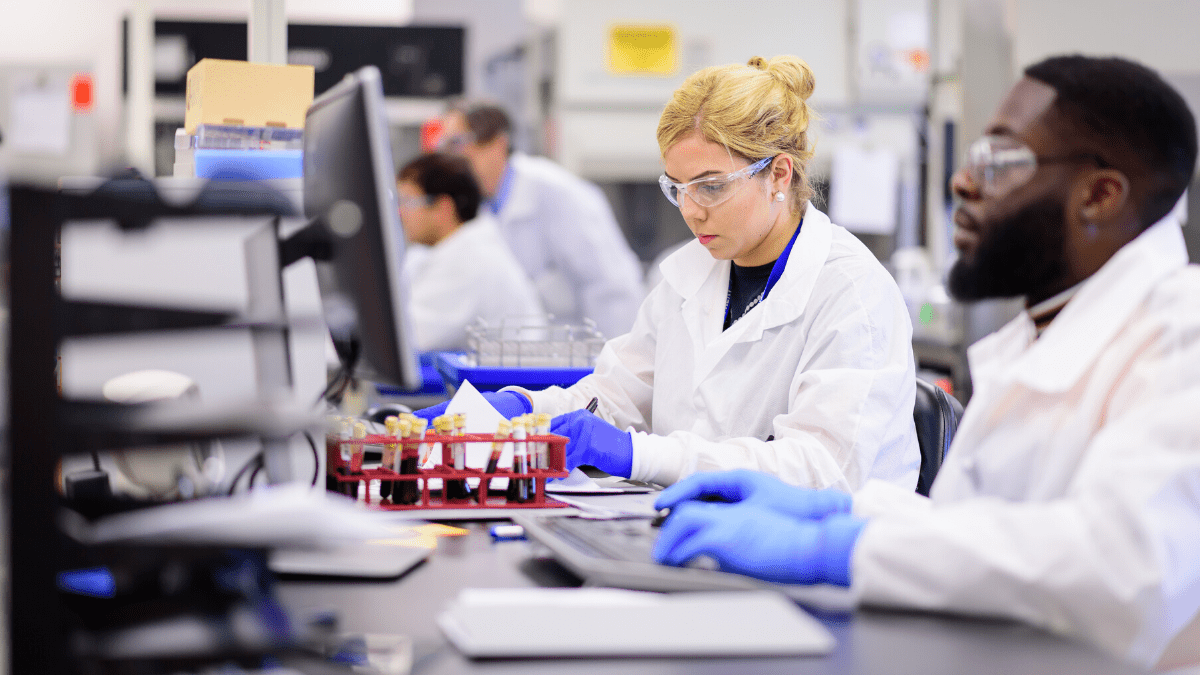 The coronavirus pandemic has had profound negative impacts on large swaths of the U.S. economy. However, certain sectors like the life sciences have remained steady or have even grown, as many of these companies have pivoted to producing COVID-19-related tests, materials, therapeutics, and vaccines. At a minimum, the pandemic has highlighted how critically important skilled scientists and innovative science are to building and maintaining a functioning, resilient society.

Similar to other sectors of the BioHealth Capital Region (BHCR), The City of Frederick and Frederick County, Maryland have a thriving and diverse life science ecosystem that is continuing to grow despite these challenging times.

Life science organizations that call the Frederick region home benefit from a deep support ecosystem with anchor incubators like the Frederick Innovative Technology Center (FITCI). Private sector companies are also in close proximity to the National Cancer Institute (NCI), The Frederick National Laboratory for Cancer Research (FNLCR) and the U.S. Army Medical Research Institute of Infectious Diseases (USAMRIID) at Fort Detrick; and they are located just a stone’s throw from other important assets, including the U.S. Food and Drug Administration (FDA) and the National Institutes of Health (NIH) located just down route 270 in Montgomery County, Maryland. What’s more, Frederick County and the region also boast one of the most highly educated and trained scientific talent pools in the U.S.

All of these factors have contributed to Frederick biohub’s recent upward growth trajectory, which has not been dulled by the current public health emergency. The innovative character of Frederick’s biohub, its outstanding location, and the county’s affordability and attractive lifestyle continues to propel growth and attract great talent from within the region as well as on a national and international scale.

When you take a look at the Frederick life science community, you’ll find government research organizations like NCI and FNLCR, larger, anchor companies like AstraZeneca, Leidos and Kite, a Gilead Company, and emerging organizations like BioFactura, all in hiring phases, which speaks volumes about the resiliency and the strength of Frederick’s burgeoning life science ecosystem.

Frederick’s diverse biohub continues to grow: Here’s a roundup of the companies that are currently hiring with links to their job boards.

AstraZeneca (AZ) has a large R&D campus in Gaithersburg, Maryland. The company’s Frederick Biologics Manufacturing Center, however, is located near the heart of The City of Frederick. The center is AZ’s largest manufacturing facility and is an FDA-licensed, large scale cell culture site with hundreds of thousands of square feet. The facility houses approximately 675 staff and supports the production of SynagisⓇ, a therapy for Respiratory Syncytial Virus (RSV) that impacts infants, as well as other investigational new biologics.

AZ recently landed on the #16 spot on USA Today’s recent story detailing the 30 largest COVID-19 contracts awarded by the federal government.  And more recently, DHHS pledged up to $1.2B in funding support for AZ for 300M doses of its vaccine candidate AZD1222 to be delivered as early as October 2020. AZ and Emergent Biosolutions recently announced a partnership to manufacturer AZ’s vaccine candidate, which is valued at approximately $87M.

The Frederick Biologics Manufacturing Center is currently hiring for approximately 27 open positions, which you can view and apply to here.

The NCI and the FNLCR, which is sponsored by the NCI, are both critical assets within the Frederick, Maryland biohub.

Over the years, the NCI and FNLCR have been a veritable gold mine for great scientists producing innovative products; it has also been a wellspring of technologies that have been transferred out of each organization to start new businesses and to launch new therapies. Kite, prior to being acquired by Gilead Life Sciences for $11.9B, licensed technology out of NCI, as did EMD Serano and miRecule, Inc., an emerging company located in Gaithersburg, Maryland, to just name a few successful tech transfer ventures.

The NCI’s Advanced Technology Research Center is the home to NCI/FNLCR’s annual Tech Showcase, which features the latest and greatest science coming out of each agency. This year, the Tech Showcase will be a virtual event held on September 9th; you can check out the event lineup here.

NCI/FNLCR has over 50 job opportunities that you can view here.

Leidos Biomedical Research and the FNLCR employ approximately 2,200 staff in Frederick County and are at the leading-edge of HIV/AIDS, cancer, and infectious disease research. Leidos has also produced some interesting spin-off companies like Explorations in Global Health (ExGloH), which was featured on BioBuzz last year and is located in Frederick.

Leidos Biomedical is currently supporting the FNLCR search for its more than 50 job opportunities that you can view here.

BioFactura is a growing biotech company in Frederick, Maryland that develops and commercializes high-value biosimilars using its patented StableFast Biomanufacturing Platform. The platform has shown to be the optimal system for bringing drugs to market with faster, lower cost, superior-quality manufacturing.

CEO Daryl Sampey launched BioFactura with several colleagues from Human Genome  Sciences (HGS) in 2003. The company received critical support from a variety of Maryland resources, but FITCI in Frederick played a particularly important role in the company’s development, which has only accelerated in the last few years.

The company’s current hiring effort was sparked by a recently awarded contract with the Biomedical Advanced Research and Development Authority (BARDA) valued at up to $67.4 million for the advanced development of its smallpox biodefense therapeutic as a potential medical countermeasure (MCM) for the treatment of smallpox. Its current and past programs include biodefense drugs against smallpox and Ebola, novel medicines for cancer, and low-cost/high-quality biosimilars for autoimmune and infectious diseases.

BioFactura is currently hiring for several open positions in manufacturing and development programs. More information can be found here.

Kite, which was purchased by Gilead Life Sciences for $11.9B in 2017, is currently building a state-of-the-art cell therapy manufacturing facility in Urbana, Maryland. The new facility is set to open in 2021, but Kite has been actively hiring talent in preparation for the grand opening.

Kite, which is based in California, announced their initial expansion to Gaithersburg, Maryland in May 2018 with the lease of a 26,000 square foot facility to support the work of a new Cooperative Research and Development Agreement (CRADA) with the National Cancer Institute (NCI) to develop adoptive cell therapies targeting patient-specific tumor neoantigens.

Then, additional expansion news came in April 2019 with the announcement of their plans to open a new state-of-the-art commercial manufacturing facility in Frederick County (Urbana) that will produce innovative cell therapies for people with cancer, including Yescarta, which was only the second gene therapy approved by the FDA, starting in 2021.

Since the announcement, the company has made significant progress on construction and has been actively hiring top talent to bring the new cell therapy manufacturing facility online and produce it’s innovative cancer therapies when it opens. Kite in Urbana is currently seeking talent to fill about 20 job openings. You can click here to review these open positions.

Also, make sure to save the date for Kite’s upcoming Virtual Recruiting Event.

Founded in 2002, VaLogic is a life science-focused risk management services and GMP consulting organization. The organization is led by founder and president Bill Robertson, who has expanded VaLogic’s services during his tenure to help “…over 300 biopharma companies advance their development and commercialization of life-enhancing therapeutics.”

In 2010, the company opened a 6,000 square foot office in Frederick, which they expanded to 15,000 square feet in 2017 to accommodate its growing staff and expanding client portfolio.

To support this ongoing growth, VaLogic has been hiring and is seeking talent for several openings.

Precision for Medicine is a global clinical research organization focused on precision medicines like cell and gene therapies. The organization leverages advanced data science and deep development and clinical trial expertise to help its clients make development more efficient, more predictable, and ultimately less expensive to produce so that patients across the globe have increased access to life-changing treatments.

Precision Bioservices, which is owned by Precision for Medicine, is located in Frederick, Maryland, at Riverside Research Park along with the NCI/FNCRL’s Advanced Technology Research Center and other life science businesses. The Frederick location serves as one of the company’s state-of-the-art biorepository/lab facilities.

Precision Bioservices, which was part of an expansion by its parent company announced in 2013, has been actively hiring since that time to support ongoing growth. The Frederick location is currently seeking to fill about 10 positions, which can be viewed here.

Charles River Laboratories, which is headquartered in Massachusetts, has a location just outside of downtown The City of Frederick at the Riverside Research Park. Charles River Laboratories is a global company with 90 locations across 20 countries; in 2019, the company supported 85% of drugs approved by the FDA. The company provides services and products that help expedite the discovery, early-stage development, and safe manufacture of new drug therapies.

The company’s Frederick location is currently seeking to hire for several open positions, which can be reviewed here. 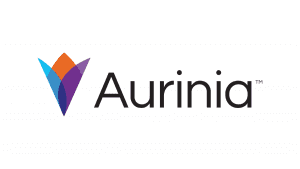 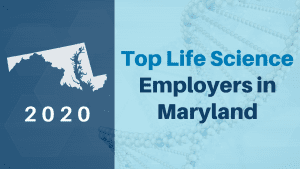 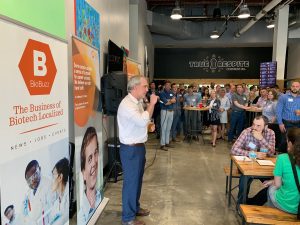 This Maryland BioPharma is Preparing for Massive Growth by Showcasing its Mission, Culture and People