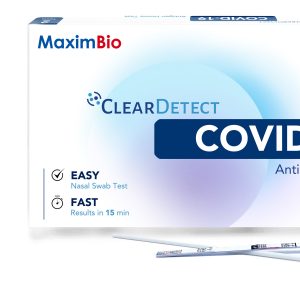 At the end of January, the U.S. Food and Drug Administration granted Emergency Use Authorization to MaximBio’s ClearDetect COVID-19 Antigen Home Test, which has been designed to be as user-friendly as possible. MaximBio Chief Operating Officer Jonathan Maa believes that the company’s ClearDetect test will differentiate itself from other tests on the market due to its simplicity and the strength of the company’s proven Lateral Flow Assay (LFA) technology. In an interview with BioBuzz, Maa said at-home testing is an urgent need in the United States and that need “will exist for some time.”

Maxim Biomedical (MaximBio) received Emergency Use Authorization (EUA) from the U.S. Food and Drug Administration for their new ClearDetect™ COVID-19 Antigen Home Test (ClearDetect™). The at-home diagnostics market is growing rapidly and is expected to value over USD 7.6 billion and register a CAGR of over 5.4% by the end of 2028.  MaximBio designed, tested, and will manufacture their new assay in the United States to help meet this growing demand for home testing. MaximBio of Maryland is ready to deliver 3 million COVID-19 rapid antigen tests by the end of 2020 and 15 million by Q2 2021. Their point-of-care test produces results in just 15 minutes.